How to Disappear the Candy

How to Disappear the Candy

Easter has come and gone in Santa Barbara.  There are still lingering signs that it was here, but mostly at grocery stores in the form of half-deflated mylar balloons and discounted peeps.  In my home were two Easter baskets still full with uneaten candy.  Each year, my wife and I find ourselves buying too much candy.  If it doesn’t end up in the baskets, it ends up in a zip bag in our pantry (usually on a high shelf such that it cannot be found easily by small hands).  With a surplus of this sort comes the dilemma of what to do with all of this candy.

Step 1) Take a careful audit – determine how much of each type of candy you have remaining.  If it can be used elsewhere in other projects later in the year, then keep it with your other baked good ingredients.  Jelly beans scream “Easter leftovers” but they also make good cupcake or cake decorations later.

Step 2) Bring what you can to work.  Chances are that your place of employment has some sort of candy dish somewhere.  It’s high time that you made a large deposit after so many small withdrawals.  The perfect type of candies here are individually wrapped like small licorice, Starburst or Nerds.

Step 3) Candy Shake!  If the kids are being difficult at dinner, announce a special dessert if they finish their meal.  Assuming that this has convinced them, get out the blender, some ice cream and milk.  It won’t take long to build the excitement.  Now, have them collect their uneaten chocolate candies.  Let them know that they must contribute to make the candy shake.  Those familiar of the story of stone soup might have thought it only to be a fable.  Have the kids shuck the pastel foils that surround any candies covered by them.  With all of their candy tossed into the blender, it’s time to blend and pour.  In one fail swoop, all of your remaining candy is gone! 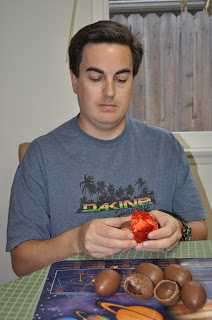 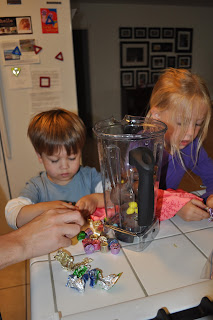 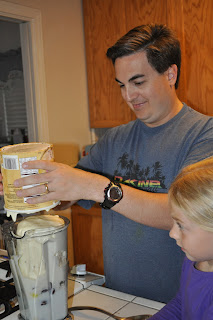 My daughter wisely saw right through my ploy this year.  I was disappointed (mostly in myself) but told her that she could opt out of handing over her candy but that she wouldn’t be able to participate in a cup of the candy shake.  She still held out until the pouring of the shakes began.  After a quick surrender of her remaining candy, we all had a great dessert and the candy has disappeared.

If you’re stuck with a stockpile of delicious and tempting sugar that you don’t feel comfortable throwing away outright, consider this post and get out your blender! 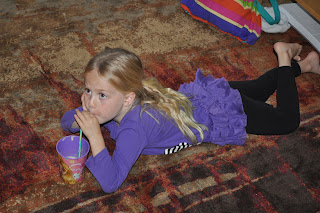 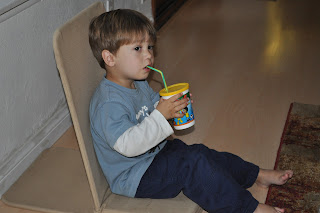