Originally I wrote this article for my friend, Al Day, who was launching a website dedicated to comics. I have always been a fan of comics, especially the characters and their many stories. I haven't been to a ComiCon since my daughter was born but I hope to bring her with me in a few years. Still, friends have told me that the article helps to make sense of the world that is ComiCon for beginners. If nothing else, it's an entertaining account:

This year I have chronicled my adventures to the Comic Con 2006. May we learn from them and laugh at them. 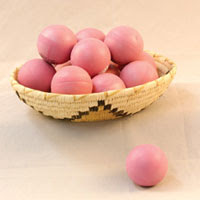 Lindsay was kind enough to drop me off at the train station on Thursday morning. This worked out well because I could get a good seat and read for the next 5 hours. That is, until the train started to fill up. I expected some additional passengers past LA Union Station as we approached Del Mar since there would be horse races, but what I discovered was much more interesting. In Glendale the train picked up a passenger who was clearly going to the Con. This individual may have bathed some point a week ago but even then didn't do a thorough job. His social skills were as sharp as a Super Pinky bounce ball, which coincidentally was the color of the tip of his nose. This man gets on the train and you can smell him aisles away. The train is relatively empty -

plenty of double seats available, but he keeps making his way further and further back towards my seat. It's no secret that I'm a magnet for people like this. They're drawn to me. But I guess since I'm going to the Comic Con, I'm drawn to them as well. As he gets closer to my seat, I know he's going to sit in the empty seat next to me. He even tries to make eye contact, which would have sealed the deal, but then he noticed the hot coed in the double seats across from mine. If there's one thing that a nerdy guy can be distracted by, it's an attractive woman. Saved! He sat next to her for about 2 minutes before he suddenly fell asleep and started to snort. Once he was out, she slinked by him as quickly and quietly as possible and made sure not to touch him for fear of taking on his odor. My thought: "I've gotta get a picture of this guy!" It wasn't going to be easy. He kept dosing in and out of sleep. Every time I brought my camera out he would wake up. Plus, the guy behind me was looking at me like I was nuts. We shared a glance and he instantly understood why I needed this picture. 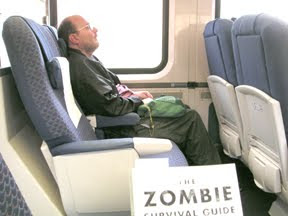 Just in case he looked at me while I took his picture, I held up my book to pretend I was really taking a picture of that. Like the juxtaposition? Click the picture for a more detailed picture. Note the clothes. Pure awesome: gold wallet chain because he's a thug, green pants, Ernie-from-Sesame St.-Shirt, jacket (despite the high heat and humidity), half-shaven, balding. This was the one time of the year that he gets to climb from the basement of his grandmother's house to interact with others. At one point he awoke to notice that the conductor had passed him up. Conductors often do this with sleeping passengers - ask me about my story of the con artist on Amtrak sometime. The conductor is a nice man. In fact, when I was one of only 8 people in my car leaving Santa Barbara, he asks only me if I'm going to the comic con. Hilarious. Am I as much of a social outcast to him as the crazy man is to me?
Our man Ernie gets up and runs down the aisle, tripping over peoples belongings, holding up his ticket. Mind you, the conductor was engaging in what seemed to be official train business on the other side of our car. The conductor doesn't know if he's nuts or just socially awkward but was relieved when he discovered it was the latter.

Once I got there, I discovered people of all kinds. People wearing costumes, the 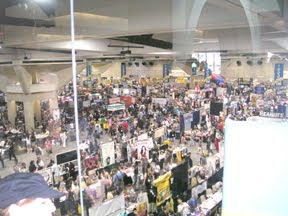 socially awkward, the slimy Hollywood executives, the people trying to be discovered by the slimy Hollywood executives, etc. If you've never been, the whole first floor of the convention center is like a marketplace of nerd wares. Comics, shirts with odd logos, video games, DVDs, action figures, you name it. The size is massive. By that I mean that it's about the size of a dozen football fields. I hit the floor running (figuratively) and did my best to collect my early bird comics. Most artists are struggling and waiting to be discovered. One of the best ways to do this is to develop a fan base. To do that, they have to give out free comics. Except this year, all of the free comics were $3! Crappy comics that have been given out year after year for free were being sold for $3 each!!! I couldn't believe it. I bought a few that looked decent, but that's about it. Not a lot of free stuff at the con.

I came home with only two mini posters. My poster tube was useless! Last year I came home with at least 30 posters and that's because I passed up on the bad ones. So no posters, no crappy comics, just a lot of people and money exchanging hands. Also, a lot of families. When did this become an event for infants? In particular I did see a mom who dressed her kid up as Spiderman for the entire con. This was 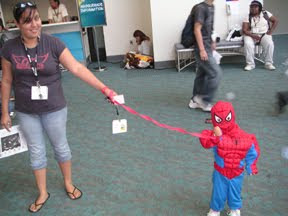 awesome not because the kid was cute but because she kept him on a tether the entire time. Mom had no idea why I was aiming at them both instead of just her cute kid. Mom, that leash demeans you both.

On the Floor there was a ton of cool stuff. I walked past a video playing Land Of Confusion, but not the version by Genesis. This was a little more metal and had an awesome video. Not that seeing the old Spitting Image characters come to life again is bad, but this was awesome anime-like animation set in a WWII atmosphere. See the Disturbed Video here.
Everyone had the same question for the proprietors of the booth - "where can I get the whole thing?!" Their response? "Uhh, that is the whole thing." 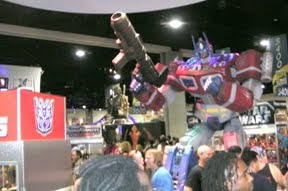 One big disappointment on the floor was the Transformers station. Last year, these guys brought in a covered big rig truck. It was told to us that this year they would uncover it to promote the new movie coming out in 2007. Nice stunt. It was rumored that in 2007's con, they would even have a life-size Optimus transform using hydraulics. What do we get instead? A crappy plastic Optimus. Couldn't they have at least used aluminumn? 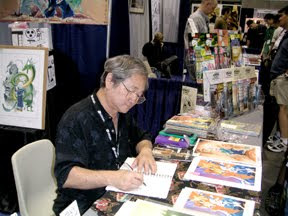 I finally got to meet up with Stan Sakai. This guy is awesome. He's doing a great job keeping Japanese history and legend alive through his comic book character Usagi Yojimbo. Does the cartoon look familiar? You might recognize it from the Teenage Mutant Ninja Turtles cartoon. Pretty awesome. Stan is also cool because he sent me Bitter Kas for my soda site. I recommend checking out his trade paperbacks or comics - great read and great art. http://www.usagiyojimbo.com 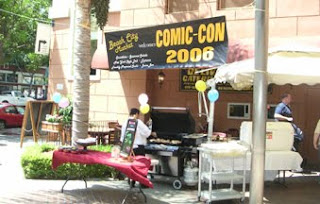 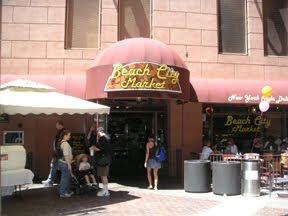 Once again, I would have to say that the Beach City Market was the best deal by far. They have everything from sushi to sandwiches including a juice bar, coffee bar, sodas, pasta bar, everything you could want or need at decent prices. Especially compared to the $2.50 you'll pay for a can of soda at the Con. See Beach City's menu at their site: http://beachcitymarket.com They're located in Horton Plaza on 1st & G. Delicious and they have a nice BBQ setup for the con attendees. 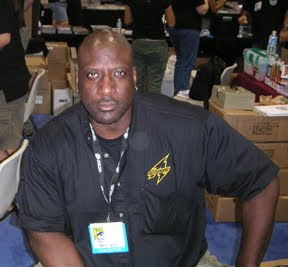 Kevin Grevioux was here selling some comics that he's done. I bought one, but the one I wanted was all sold out (and it was only Thursday!) You might recognize him from Underworld. 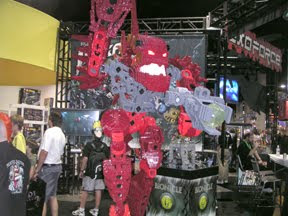 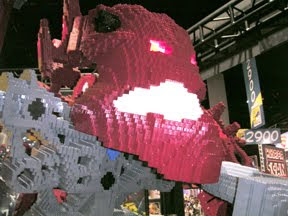 Lego had a nice setup again this year. Their Bionicle statues were awesome. All made of lego. 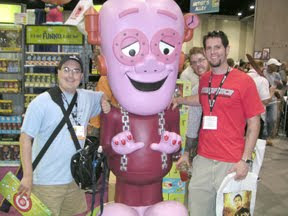 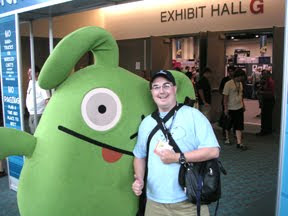 Brian Macdonald and I pose with this large Frankenberry bobble head (actually bobbles!)
Then Me and an Ugli Doll. Love these guys. 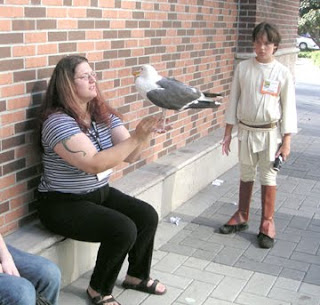 At one point I went to get lunch and walked by the Bird Whisperer. At least that's what I nicknamed her. She and her young padawan saved this bird after he got hit by a car. They tamed him and brought him to safety. I got my lunch and walked away.

Noel Neill, Sam Huntington, Jack O'Halloran, Richard Donner and Marc McClure made up one heck of a Superman Panel. They discussed Noel's influence on women in the media and how she was ground-breaking as Lois Lane, an independent woman character. The big talk, however, was the Richard Donner release of his cut of Superman II. As you may know, he was set to direct both Superman I and II but was pulled from II half way through production. Almost thirty years later, they will soon release the footage that he took into the movie as he wanted it to be. They showed us a good 15 minutes of the movie including a lot of phantom-zone and Krypton. Good stuff.

The JLA panel was a little disappointing because there was little acknowledgement of the TV cartoon. The talk was focused almost entirely on the Infinite Crisis and the new JLA. They gave some spoilers and hinted at the new team. Who's the new JLA? You can count on the trinity: Batman, Superman and Wonder Woman. Likely Hour Man, Red Tornado, a Green Lantern and a Flash. GL may be Hal Jordan. Flash may be Kid Flash, Wally's grandson. They also mentioned a new, hot female that will be added to the team but didn't give it away. Jessie Quick will be in the book but not the JLA. Same goes for Martian Manhunter. There was also talk of a potential Mogo and maybe even Sinestro-Mogo. 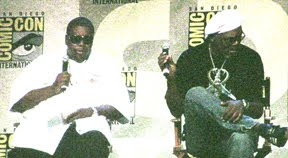 Everyone was excited about the new Snakes On A Plane movie coming out. Kenan Thompson introduced Sam Jackson who showed about 10 minutes of the movie. It's about what you might expect - snakes escaped on a plane. They also showed a lot of the fan pictures and movie posters. They more or less talked about how it was just a concept and the script came after the poster and name were released.

One thing is for sure about the con: Diversity.

The Comic Con International is the first place that I have seen that truly embraces the popular forms of diversity (race, belief, sexual preference, ability) but also embraces the unrecognized ones as well. At the beginning of this article, I make light of Ernie, the train passenger with body odor, because he would stand out in a crowd of normal individuals. This man has no sense of clothing, no sense of social order and he possibly suffers from narcolepsy. At the comic con, not only is he not alone - he's among friends! The internet has a similar community online (making an exception for those without the economic means). The comic con international is the first place the truly embraces the diversity of the world, encouraging face-to-face interaction. With comics and popular culture as our focal point, I can agree, disagree, joke and just plain communicate with people from different countries, people with malformed limbs, or people who have had only Mountain Dew to drink for the past 30 days. I have had serious discussions and seen people find work in this environment where they would not find communication or employment anywhere else. It's a comfortable environment for people from all walks of life.